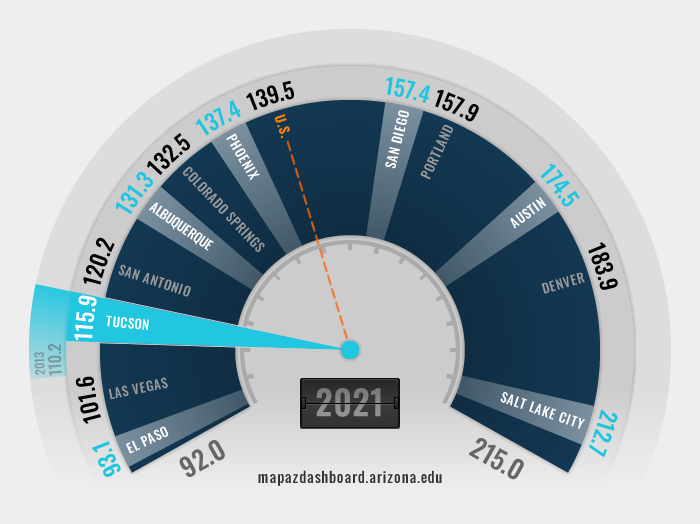 Wages per worker in creative occupations for Tucson averaged $79,097 in 2021, which was more than $10,000 below the national average of $90,735. Tucson ranked near the bottom of comparable peer metropolitan areas. Creative workers in San Diego earned the highest wages in 2021 at $102,159.

After reviewing several definitions of creative occupations, the MAP team decided to follow the widely accepted definition given by Richard Florida in his book “The Rise of the Creative Class”. The creative class, or creative occupations as referred to on the MAP, is broken down into two sub-groups: the super creative core and creative professionals. The occupations are defined by the Standard Occupation Classification (SOC) system, a federal statistical standard used by federal agencies to classify workers into occupational categories for the purpose of collecting, calculating, or disseminating data. The list of creative occupations (below) are the names given by the SOC. To view a detailed breakdown and definition of each occupation visit the SOC on the Bureau of Labor Statistics webpage.

The detailed employment and wage data come from the U.S. Bureau of Labor Statistics, Occupational Employment Statistics (OES) survey. The U.S. Bureau of Labor Statistics collects survey data on wages by occupation and industry. The OES data include detailed employment and wage estimates for over 800 occupations and industries. Occupational wages are measured before taxes and do not include fringe benefits. The cost of living adjusted data comes from the Bureau of Economic Analysis Regional Price Parities (RPPs). The RPPs are indexes that allow the comparison of prices across regions.