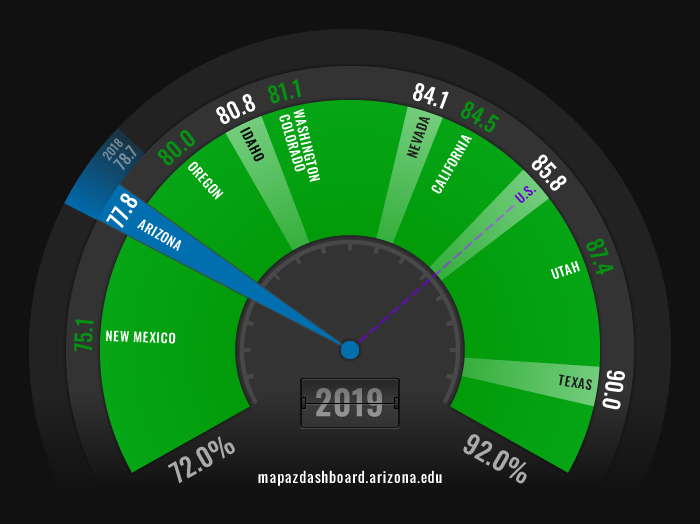 Those who do not finish high school are much more likely to be unemployed, and when employed, their earnings fall far below those with a high school degree or higher. This gap can add up to a substantial deficit in earnings over a lifetime. Economic consequences follow through to the community at large with lower wages, less spending power, and the likelihood of higher costs for public assistance. A high school diploma, or its equivalent, is the basic prerequisite to college or trade school.

Arizona followed the same general pattern as the U.S. in 2019, with respect to graduation rates by race and ethnic origin. However, Arizona rates fell short of national graduation rates across the board. In both Arizona and nationwide, more Asian/Pacific Islander students graduated on time than any other race or ethnicity. Arizona had 74.4% of Hispanic students and 73.3% of black or African American students graduating on time, while nationwide, 81.7% and 79.6%, respectively, graduated on time. Between the U.S. and Arizona, the largest gap, a 7.3 percentage point difference, in graduation rates existed for Hispanic students, while the smallest gap, a 2.6 percentage point difference, existed for Asian/Pacific Islander students.

At 94.2%, Greenlee County had the highest percentage of public high school students graduating with their peers in 2021. Pima had only 70.7%, placing it last among Arizona counties.

The graduation rate of public high schools is based on the four-year adjusted cohort graduation rate (ACGR). The “cohort” measure of four-year graduation is the share of students who comprise a ninth-grade class and graduate by the fourth year, including transfers into the class, minus those who transfer out and deceased students. For example, those entering ninth grade in the 2008-2009 school year comprise the cohort measured by the 2012 data. State-level graduation rate data comes from the National Center for Education Statistics (NCES). County-level data comes from the Arizona Department of Education. NCES imputed the data from Virginia to come up with the Native American total.