Percent of the Population Who Reported Good or Excellent Health (2019) 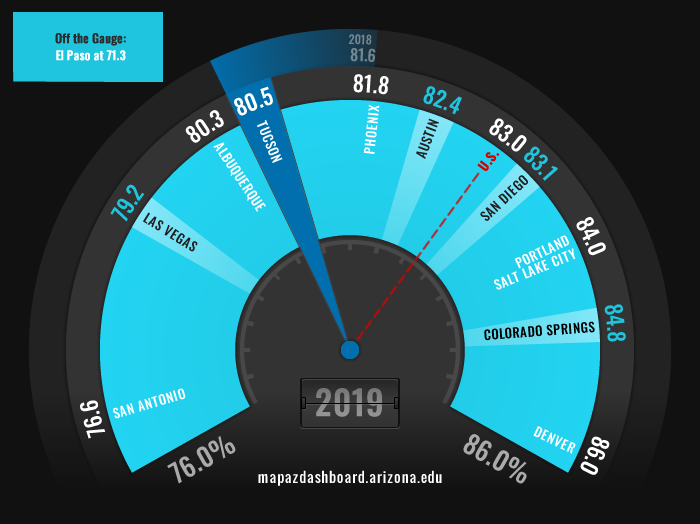 Many factors determine one’s health and well-being. An individual’s health plays an important role in their quality of life. Additionally, diseases like diabetes, heart disease, and obesity have high financial costs for the nation. According to the Centers for Disease Control (CDC) heart disease is the leading cause of death in the U.S. Regular physical activity plays an important role in the prevention of many health-related diseases including heart disease. The U.S. Department of Health and Human Services defines regular physical activity as participation in moderate and vigorous physical activities as well as muscle-strengthening activities. According to data collected in 2015 for the Behavioral Risk Factor Surveillance System nearly 80% of adults in the U.S. do not meet the guidelines for both aerobic and muscle-strengthening activities. Health data is vital to identify emerging health problems and trends. Additionally, health data can be used to identify areas where public health policies may be needed and to evaluate existing programs.

The percentage of the population who had a diagnosed prevalence of diabetes in 2019 ranged from 7.3 to 15.3 percent among the western metropolitan areas. Tucson’s rate of 9.5% ranked it sixth, with Colorado Springs posting the lowest prevalence at 7.3% and El Paso the highest at 15.3%.

A majority of the data reported in the Physical Well-Being indicator originates from the Behavioral Risk Factor Surveillance System (BRFSS). The BRFSS is a health-related telephone survey that collects state data about U.S. residents regarding their health-related risk behaviors, chronic health conditions, and use of preventative services. The BRFSS data presented is collected from the Centers for Disease Control and Prevention (CDC) and the County Health Rankings.