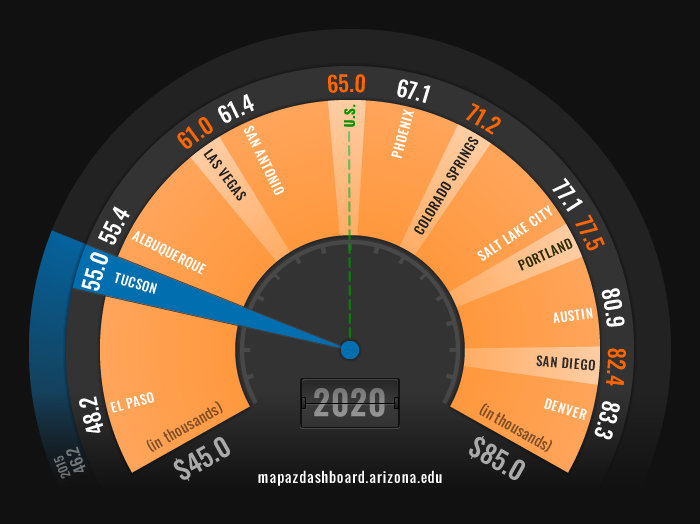 The median household income in 2020 for the Tucson MSA’s Hispanic population was $47,472, more than $7,000 lower than the Hispanic population nationally. All races and ethnicities in Tucson fell short of the national median household income level. In 2020, there was a substantial gap between the median income for Hispanic households and white, non-Hispanic households within Tucson, with a difference of nearly $14,000.

Tucson’s population aged 65 and older is the only age category in which the MSA fares better than the nation, but only slightly. The median household income for the 65 and older age group in Tucson was $50,152, slightly higher than the nation at $47,484. In contrast, the 45–64 and 25–44 age groups fare better within the state of Arizona and nationwide when compared to Tucson. The median household income for the 45–64 age group in Tucson was $66,131, whereas the national rate was more than $12,000 higher in 2020. Likewise, the 25–44 age group earned $13,604 dollars less in Tucson when compared to the U.S.

Household income includes the sum of income earned by individuals 15 years and older living in a household during the calendar year, whether they are related to the head of the householder or not. A person living alone is also counted as a household. Income includes wages and salaries, transfer payments, child support, rental receipts, dividends, and interest, as well as other kinds of income routinely received. Median household income has been adjusted for inflation. Median refers to the midpoint of the income distribution, with half the number of households receiving income above the midpoint and half receiving income below. It is important to note that a household often includes more than one income earner. Median Household Income data is from the Census Bureau’s American Community Survey (ACS). The ACS is a nationwide rolling-sample survey that produces one and five-year estimates on demographic, social, housing, and economic measures. All data provided in this analysis utilized five-year estimates. Note that the ACS five-year estimates are produced over a five-year time period and can only be compared to non-overlapping five-year estimates (for example 2005-2009 and 2010-2014).