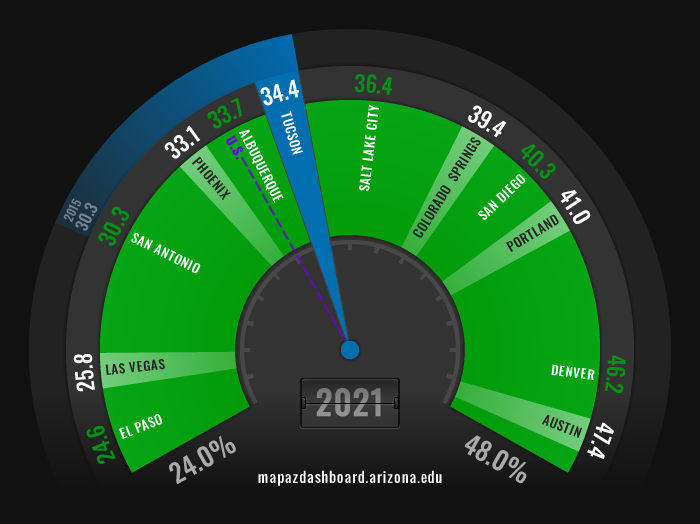 The four-year college attainment rate in the Tucson Metropolitan Statistical Area (MSA) was near the middle of the pack in 2021, compared to 12 peer western MSAs. The share of the population age 25 and older with a Bachelor’s degree or more was 34.4% in Tucson. That was far below the Austin MSA, which ranked first at 47.4% but well above the El Paso MSA, which ranked last at 24.6%. Tucson’s four-year college attainment rate has increased by 4.1 percentage points since 2015.

Educational attainment is one critical driver of long-run income, job, and population growth for nations, states, and local areas. More broadly, regions with higher concentrations of highly educated residents tend to perform better across many socioeconomic indicators, including the crime rate, poverty, productivity, unemployment, and others. In addition, less educated residents also tend to earn higher wages in regions with a larger concentration of college graduates. 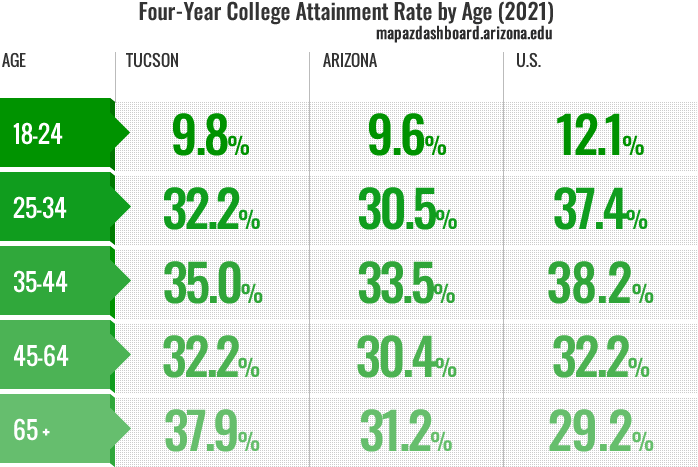 Educational attainment reflects the share of the population age 25 and older with a given level of education. Respondents report the highest level of education completed. The data come from five-year estimates for 2010, 2015, and 2021 from the U.S. Census Bureau’s American Community Survey (ACS). Note that the ACS five-year estimates are a rolling survey taken over five years, therefore, they are only comparable on a five-year interval. Data for 2000 are drawn from the 2000 Census Summary File 3.