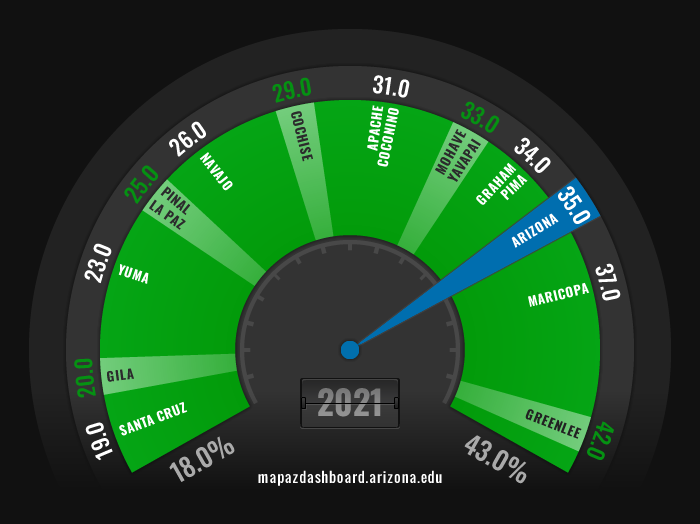 In 2021, 35.0% of students in Arizona passed the AzM2 in English Language Arts (ELA). In Greenlee County, 42% of third-graders met or exceeded the state proficiency standards. Maricopa County tied for second at 37%, while Cochise and Pima counties tied for third with 34%. Performance across Arizona counties varied substantially with only two counties reporting scores higher than the state average of 35% on the third-grade ELA test. The remaining counties reported scores below the state average with Santa Cruz County posting the lowest at 19%.

AzM2 scores in 2021 were lower across the board than in 2019. The statewide test was not administered in 2020 due to the COVID-19 pandemic. The pandemic created a challenging environment for students and educators. Year-to-year comparisons should be assessed with caution. However, the data in 2021 allows us to track where the students currently are and to appropriately address the steps necessary for our children’s education as we move beyond the challenges the pandemic created.

In general, the percent of students passing the AzM2 ELA test in 3rd grade fell by more than 11 percentage points in Arizona. There were exceptions, with scores in Apache County falling by only one percentage point. The decline in ELA scores for most counties ranged between eight to 15 percentage points. Statewide this decline was consistently felt across all races & ethnicities and genders. However, as discussed below, many minority groups had relatively low standardized test scores prior to the pandemic.

Standardized test scores are one measure of a region’s ability to prepare its youth for the demands of higher education and a career. Creating skilled and productive future workers can benefit the local economy, and maintaining high-quality school systems can attract a talented workforce to the area. In addition to the significant economic effects of developing a young, skilled workforce, good school systems raise the desirability of an area from a quality-of-life perspective. Low student achievement means that students may be ill-equipped to attend college or perform high-skilled labor. Low-performing schools also may be indicative of socioeconomic challenges in the community, such as poverty.

In the AzM2 Math test, 27% of eighth-graders statewide met or exceeded the state proficiency standards. That share increased to 30% for eighth-graders in Maricopa County and to 29% for Apache and Graham counties. Performance across Arizona counties varied substantially with three counties reporting scores equal to or higher than the state average of 27% on the eighth-grade math test. The remaining counties reported scores below the state average with Gila County posting the lowest at 12%. When compared to pre-pandemic scores in 2019, the statewide decline for the AzM2 math test was five percentage points. There was significant variation among the counties with Apache and Greenlee improving the percentage of eighth-grade students passing the AzM2 test in 2021, while other counties reported declines by 11 to 12 percentage points.

Between 2003 and 2015, academic scores in Arizona improved more rapidly than the nation, allowing Arizona to surpass the nation in math and gain ground in reading. Math scores for eighth-graders in Arizona rose by nearly a percentage point over the past decade, compared to a decline of .25% for the nation. However, in 2019 math scores in Arizona declined slightly once again dropping below the nation. Reading scores for fourth graders also improved over the past decade, rising from 210 to 215.8. This 2.8% increase for Arizona compared to a 0.1% decrease for the nation has reduced the achievement gap between the nation and Arizona, from 9.6 points in 2009 to 3.6 points in 2019.

Each fall and spring Arizona students in the third through eighth grades, and high school, take the AzM2 or the Multi-State Alternative Assessment (MSAA) exam. These exams measure students’ proficiency in English language arts and math. Percentages reported here are for those students who passed the 2021 school year AzM2 and MSAA test in third-grade English language arts and passed either the AzM2 or MSAA test in eighth-grade math, meaning that they are proficient or highly proficient in the tested skill. As of 2015, these AzM2 (formerly referred to as AzMERIT) exams replaced AIMS for reading, writing, and math. Unlike AIMS, passing is not a requirement for graduation from high school. National data are the average scale scores from the NAEP, an ongoing student assessment program conducted by the National Center for Education Statistics under the U.S. Department of Education.