Historically, housing expenditures (including utilities) for both homeowners and renters that exceed 30 percent of a household’s income are considered cost-burdened, this designation evolved from the United States National Housing Act of 1937. Households that are cost-burdened are more likely to struggle to pay for other basic needs such as healthcare, childcare, transportation, and even food.

When comparing household tenure, renters are more likely than owners to be cost-burdened. In the Tucson MSA during 2020, 21.6% of owners and 51.0% of renters were housing cost-burdened, this was consistent with the state and the nation.

Income levels play a significant role in determining the percentage of households that are housing cost-burdened. As one would expect, households that have lower income are more likely to experience housing cost burden. In Tucson, of the households that earn less than $20,000, 40.7% of them pay more than 30% of their income in housing costs. This was significantly higher than those earning less than $20,000 throughout the state of Arizona and the nation which had housing cost burden rates closer to 33.0%. At the other end of the spectrum, of those that earned $75,000 or more, only 4.0% were housing cost-burdened in Tucson, while the rate increased slightly for the state to 5.8% and was more than double for the nation at 10.4%. 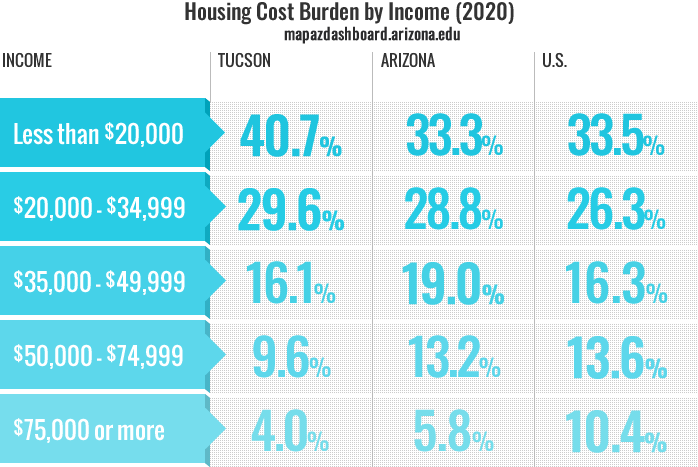 In 2020, those aged 65 years and older posted the highest percentage of housing cost-burdened households in Tucson at 22.6%, just behind those aged 25 to 34 that had a rate of 22.4%. For the U.S. and state of Arizona, the 65 and over age group had a higher rate of households that were housing cost-burdened than did Tucson. However, those aged 25 to 34 had higher rates in Tucson when compared to their peers around the state and nation.