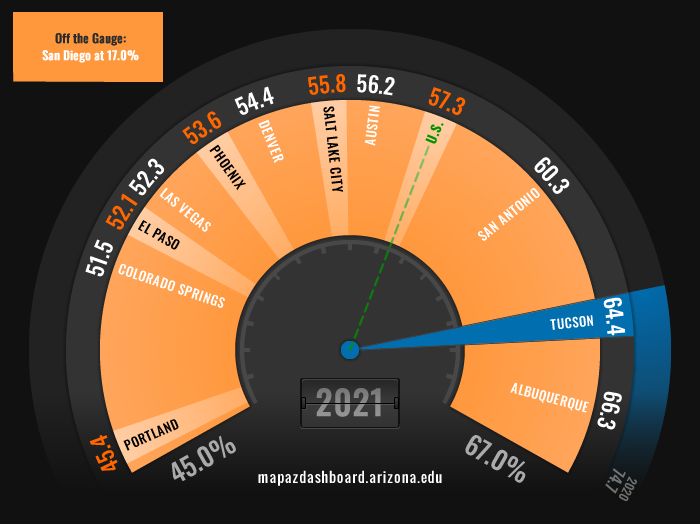 In 2021, 64.4% of homes sold in the Tucson Metropolitan Statistical Area (MSA) were affordable to a family earning the local median income. This was a significant decrease from 2020. Tucson ranked second among peer metropolitan areas in housing affordability, just behind Albuquerque. Only 57.3% of homes in the U.S. were affordable to families earning the median income for the nation, while the share of affordable homes in Portland was near 45%. San Diego’s share of affordable homes was so low, at 17.0%, it was off the chart!

All the MSAs tracked on the MAP reported a decrease in the percent of affordable homes in 2021. Colorado Springs posted the largest decline in housing affordability while San Antonio the smallest. The median home price in all MSAs tracked on the MAP is rising at a faster pace than wages. Historically the share of affordable homes in Tucson has fluctuated. However, since 2009 it has remained higher than the national share.

Housing affordability is an important issue for many households. Access to affordable housing is important because the home is the largest asset for most people, and its price can affect spending in other areas such as childcare, education, health care, and leisure activities. Since personal consumption makes up the better part of the economy, and discretionary income levels are influenced by the cost of housing, home prices are an important factor in the local economy. Several factors can influence home prices, including mortgage rates, demographics, income growth, the supply of new housing, and speculative trends. Housing affordability is determined by the share of homes sold in an area that would have been affordable to a family earning the local median income. Housing affordability data comes from the National Association of Home Builders (NAHB).

Note the change in methodology in how housing affordability measures are calculated starting in 2012, full details on the change can be found in the "How is it Measured Section" below.

Housing affordability data comes from the National Association of Home Builders (NAHB). The index is calculated for a given area based on two major components: income and housing. NAHB’s methodology includes using annual median family income estimates and assumes that a family can afford to spend 28% of its gross income on housing. Additionally, monthly sales transaction records are used to determine the sales price of sold homes. Further, NAHB calculates the monthly principal, interest, and taxes based on a 30-year fixed-rate mortgage with a loan for 90% of the sales price. The data is reported quarterly and the Making Action Possible (MAP) research team aggregates the data to an annual index value.