Soaring Prices: What Does that Mean for Electricity Costs?

We know that prices have increased over the last year. We have felt it in our pocketbooks at the grocery store, the lumber yard, and when car shopping. You may have even noticed it when you paid your utility bills. According to data released by the Bureau of Labor Statistics from the Consumer Price Index (CPI) program, electricity prices were up by over 6% in 2021. The MAP Dashboard tracks the annual electricity price by state and utility as part of its Energy Use core indicator. The latest data available from the U.S. Energy Information Administration (EIA) placed Arizona with the fourth-highest price among the western states in 2020 (Figure 1). Arizona’s average electricity price of 12.3 cents per kilowatt-hour (kWh) in 2020 declined slightly from 2019. 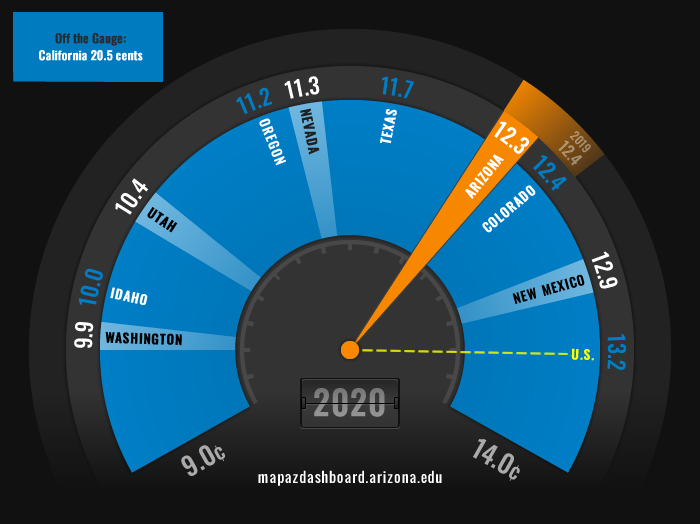 The recently released CPI data suggests that we should expect an increase in utility prices when the 2021 EIA data are available. In addition to the annual data released by the EIA, they also report monthly data for the states. October 2021 data are the latest available as of this writing. Arizona’s average utility price increased from 9.2 cents per kWh in October of 2005 to 12.8 cents per kWh in October of 2021 (Figure 2). That is an increase of 39.0%. Arizona fared relatively well during this period when compared with other western states, like California, Oregon, and Idaho, which all posted increases of over 60%. Arizona’s average monthly electricity price of 12.8 kWh in October of 2021 is high compared to previous years but is still slightly lower than in October of 2018 when the price was 13.2 cents per kWh.

We know that Arizona has a relatively high cost per kWh for electricity compared to other western states, but what does that mean for our pocketbook? Your electricity bill is determined by how much you pay for electricity and how much electricity you consume. Consumption rates vary significantly among the western states and mostly depend on the weather in your region and your personal temperature preferences. In 2020, Texas residents consumed the most electricity, with the average monthly consumption per customer at 1,132 kWh. Arizona’s rate was the second-highest at 1,114 kWh. The U.S. average monthly consumption was 893 kWh, while Californians consumed the least at 572 kWh. The amount of electricity consumed by Arizonans increased by 9.8% between October 2019 and October 2020. That is a substantial increase as consumption rates varied by only a small percentage (typically less than 1%) during the previous five years. The large increase in 2020 may be due to several factors like increases in population, changing weather patterns (i.e. warmer summers), and that more individuals worked from home during the pandemic.

The MAP will continue to update energy-related data as it becomes available. Rising prices are a concern for many individuals around the county. Stay tuned for additional articles on rising prices and the economic implications that may have for our region.

Note that this data comes from the U.S. Energy Information Administration (EIA) which reports data on the average price and consumption of electricity for the U.S., the states, and utility providers. The net metering data is reported to the EIA by each individual utility, which the EIA compiles and publishes for the public. The EIA is a statistical and analytical agency within the U.S. Department of Energy.