Infrastructure is the foundation of economic activity. It takes many forms, including highways and roads, water and sewer, telecommunications, airports, and border facilities.

Many forms of infrastructure are meant to be widely and easily available to users. Funding for this infrastructure through user fees, fee-for-service mechanisms, gas, and other related-input taxes, however, is insufficient to maintain it or expand it due to the level of use vs. associated infrastructure costs. In response, most jurisdictions rely on a variety of federal, state, and local funding sources. Sometimes local revenues are raised through a broad-based tax, such as a sales tax levied on a wide range of purchases. This tax revenue, therefore, is a tool to fund infrastructure and/or transit which translates to regional investments.

The Tucson Metropolitan Statistical Area (MSA) and many of the comparable MSAs listed on the MAP Dashboard partially fund transportation infrastructure with a sales tax. These MSAs are listed in Figure 1, along with metropolitan (or county) population and per capita personal income for calendar year 2019. The Tucson MSA is composed of Pima County.

Figure 2 shows the relevant transportation sales tax rate and revenues for the fiscal (or calendar) year before the COVID-19 pandemic began. We show total revenues, as well as revenues on a per capita and on a per dollar of personal income basis. We focus on pre-pandemic revenues in order to avoid disruptions caused by the outbreak. Note that the sales tax jurisdiction sometimes differs from the metropolitan area boundaries. See the detailed descriptions below for more.

Revenues for most regions are reported for fiscal years, with the exception of Denver and Las Vegas, which are on a calendar year basis. Most fiscal years end on June 30 of the year and begin on July 1 of the prior year. For example, for the Regional Transportation Authority (RTA) of Pima County, fiscal year 2019 began on July 1, 2018, and ended on June 30, 2019. The exception here is Austin, where the fiscal year ends on September 30.

Figure 3 shows the distribution of total revenues by jurisdiction and the applicable sales tax rate, ranked by pre-pandemic revenues. Note that for total revenues, little association occurs between the tax rate and total revenues.

The big differences in revenues across regions reflect different sales tax rates, economic and demographic characteristics, and other differences across regions. Part of the reason that the Regional Transportation District in Denver raised more sales tax revenue than the Pinal County Regional Transportation Authority is because the tax rate in Denver was double the tax rate in Pinal County. But that was not the only reason. Denver is also a much bigger economic area. In 2019, Denver’s population was near 3.0 million, while Pinal County’s population was less than 500,000. Further, per capita income in 2019 in Denver was more than double per capita income in Pinal County.

Let’s take a closer look at revenues across regions and try to account for differences in population and income. First, we can control for the impact of population size by calculating per capita revenue. Figure 4 shows the results. Revenues were highest in Salt Lake City, at $263.7 per person, and lowest in Pinal County, at $36.9 per person. Revenues in Tucson were $82.9 per person, while revenues in Maricopa County were $104.0 per person. Notice that jurisdictions with lower sales tax rates tended to have lower per capita revenues, with the exception of Clark County, Nevada. More on that later.

Figure 5: Transportation sales tax revenues per $1,000 of personal income in 2019

Sales taxes rely on sales tax bases, which means that for any given jurisdiction, some items are subject to tax and some are not. These choices vary across regions. For instance, transportation sales tax revenues in Denver include both sales and use taxes. Further, as individuals age, they typically spend more on services like health care which are usually not taxed. Thus, jurisdictions with older populations will experience lower per capita revenues and per dollar of personal income revenues, other things being the same.

In addition, some regions depend on tourism more than others, which can boost taxable sales per capita and per dollar of income. This is likely a major reason for the strong revenue performance of Clark County, Nevada (Las Vegas).

In fiscal year 2019, a portion of online sales (marketplace facilitators and remote retail sellers without a physical presence in a state) was not subject to sales tax. Thus, regions with more exposure to remote retail sales would tend to have lower sales tax revenues per capita and per dollar of income, other things remaining constant.

Within Arizona, we might expect per capita and per dollar revenues to be similar. For Maricopa and Pima counties, revenues are fairly similar once we account for differences in population and income. The remaining differences might be related to different exposure to tourism, differences in the availability high-cost luxury and industrial items, and other differences.

Even after adjustment for population and income, revenue for Pinal County remains low. In part, this reflects the fact that the relevant sales tax base is narrower. It includes only retail sales and the tax is levied on the first $10,000 for individual items. This matters for sales of big-ticket items like vehicles.

Use the drop-down menu below to view a summary of each region included in this analysis.

Pima County, Arizona, is the second largest county in Arizona composed of cities Tucson and South Tucson, and Towns of Marana, Oro Valley, and Sahuarita. The Tucson MSA anchors the Arizona Sun Corridor and is only 60 miles north of the U.S./Mexico border.

The RTA has delivered more than 890 projects and services as of spring 2021, which includes transit, roadway, safety, and environmental and economic elements.

Three of these counties, Hays, Travis, and Williamson, belong to the Capital Area Metropolitan Planning Organization (CAMPO) and Central Texas Regional Mobility Authority, an independent government agency created in 2002 to improve the transportation system in Williamson and Travis counties.

Capital Metro was established by a voter referendum in 1985 and is funded in part by a 1.0% sales tax levied by members of its service area. Not all jurisdictions in the three-county area collect the sales tax. Instead, they contract for services. According to Capital Metro, there are 1.3 million residents in the service area.

Texas State Law allows local jurisdictions to charge a combined sales tax up to 2%, of which the City of Austin is part. The City of Austin receives half of that and has done so since 1968. However, that money goes into the City’s General Fund. Austin Transportation is a self-funded enterprise department.

As shown in the Texas Comptroller’s Sales Tax Rate History, the current 1% transit tax rate has been in place since October 1995. Capital Metro handles collection and disbursement of that revenue, which is collected from its partner cities like Austin, Leander and Manor.

The Pikes Peak Rural Transportation Authority (PPRTA) is a collaboration of five regional governments (Colorado Springs, Manitou Springs, El Paso County, Green Mountain Falls, and Ramah) to work on roadway improvements and public transit. The 2010 Census population of participating regions was 587,687. More than half of the PPRTA funding is allocated to capital transportation projects.

Residents of non-participating municipalities pay the PPRTA sales tax increment when they shop in areas which collect the tax, with the notable exception of vehicle purchases (which are taxed by place of residence of the purchaser).

The City of Denver is the capital of Colorado and has the highest population in the state. The city is named after James W. Denver, who was Governor in 1858 of the Territory of Kansas, which extended from Missouri to the Rocky Mountains. The State of Colorado was part of the Kansas territory at that time. The Denver-Aurora-Lakewood MSA includes 10 counties.  The Denver MSA includes Adams, Arapahoe, Broomfield, Clear Creek, Denver, Douglas, Elbert, Gilpin, Jefferson, and Park counties.

The Regional Transportation District (RTD) provides public transportation in eight counties including all of Boulder, Broomfield, Denver, and Jefferson counties, parts of Adams, Arapahoe and Douglas counties, and a small portion of Weld County. The RTD was created in 1969 by the Colorado General Assembly to focus on regional transportation planning. In 1973 voters approved a 0.5% sales tax initiative which has helped to finance a $1.56 billion multimodal transit system and expand routes, acquire private bus companies and improve service throughout the Denver metro area. Today, sales and use tax is RTD’s primary revenue source.

The City of Las Vegas, Nevada, is the county seat for Clark County, Nevada, which anchors the Las Vegas-Henderson-Paradise, Nevada MSA. The area is a leading cultural, commercial, and financial center for Nevada, and the city is known for being a global entertainment center, famously known for its casino hotels and activities.

Phoenix is the largest MSA within the Southwest Region. It includes the cities of Phoenix, Scottsdale, and Mesa, and is comprised of Maricopa and Pinal counties.

Maricopa Association of Governments (MAG) developed a regional transportation plan to extend the half-cent Maricopa County excise tax for transportation. The plan, known as Proposition 400, was approved by voters in 2004. The extension, which began in January 2006 expires in December 2025. The Proposition 400 sales tax provides funding for freeways and state highways (56%), public transportation (33%), and improvements for arterial streets (10.5%). 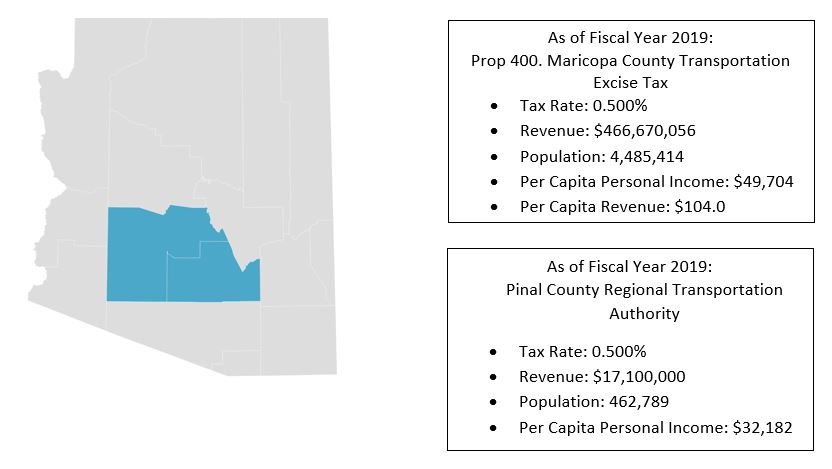 The city of San Diego is the county seat for San Diego County, California, which comprises the San Diego-Chula Vista-Carlsbad MSA. The area sits along the coast of the Pacific Ocean and is known for its affiliation with 16 military installations of the U.S. Coast Guard, Marine Corps and Navy.

The county borders Mexico at the San Ysidro Port of Entry and is part of the largest shared metropolitan area between the United States and Mexico, known as the San Diego-Tijuana transborder metropolitan area.

San Diego County residents approved a 20-year half-cent sales tax in 1987 known as TransNet, to fund various transportation projects in the region. It became one of California’s largest transportation improvement programs. The funds are used for local, highway and transit projects throughout the county and are administered by the San Diego Association of Governments (SANDAG).

Pima County, Arizona, is the second largest county in Arizona composed of cities Tucson and South Tucson, and Towns of Marana, Oro Valley, and Sahuarita. The Tucson MSA anchors the Arizona Sun Corridor and is only 60 miles north of the U.S./Mexico border.

The RTA has delivered more than 890 projects and services as of spring 2021, which includes transit, roadway, safety, and environmental and economic elements.