The health and social well-being of a region is closely tied to performance in all facets of human development. Improving healthcare quality and affordability is among the top priorities of the U.S. government. To improve healthcare, it is important to enumerate, understand and evaluate persistent problems; one such problem in Arizona (and all U.S.) healthcare is chronic disease incidence and prevalence. Chronic diseases, the leading causes of death and disability in the United States, are health conditions that last three or more months and cannot be prevented by vaccines or cured by medication. In the U.S., at least 25 percent of adults have at least two chronic conditions accounting for 86 percent of the $2.7 trillion annual healthcare expenditures related to chronic disease patients (Centers for Medicare and Medicaid Services 2016).

This study conducted an exploratory analysis of chronic diseases reported in electronic health records (EHRs) for inpatient visits in Arizona hospitals during the time period 2012-2016. The study focused on 11 Arizona counties: Apache, Cochise, Coconino, Gila, Maricopa, Mohave, Navajo, Pima, Pinal, Yavapai, and Yuma. The EHR dataset provided a wealth of information regarding cost and frequency of inpatient visits in Arizona. Of the total 915,355 EHR analyzed in this study, the average cost of patient visit was highest in Mohave County ($80,340) and lowest in Coconino County ($47,219), while Maricopa County had the highest percentage of total patient visits at 41.41%, followed by Yuma county at 20.57%, and then Pima County at 15.09% (see Table 1). 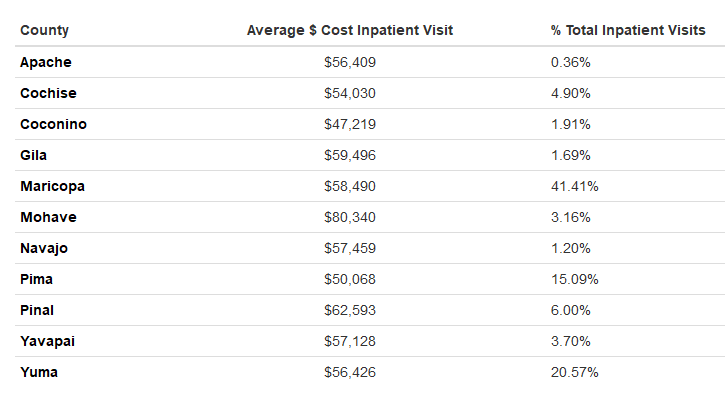 Figure 1 reveals the top 10 prevalent chronic diseases/conditions in Arizona, in decreasing order of prevalence, in 2012-2016 (i.e., number of patients visits recorded with the disease during 2012-2016 time period). All of the 11 counties explored shared the same set of top 10 prevalent chronic disease/conditions – hypertension, disorders of lipoid metabolism, diabetes, nondependent abuse of drugs, cardiac dysrhythmias, chronic ischemic heart disease, acquired hypothyroidism, obesity, chronic renal failure and neurotic disorders; but with a difference in the relative ranking of these diseases. For example, diabetes was the most prevalent health condition in Apache County, whereas hypertension was the most prevalent condition observed in patient visits in other regions.

As part of the study, the EHR findings were consolidated and displayed on interactive dashboards that provide the opportunity to explore patterns of visit counts and average visit cost across different categories of age groups, body systems, time periods, regions, gender, and ethnicity. These dashboards can be accessed here or here.

The second phase of this research was a detailed exploration of individual chronic conditions investigating networks of simultaneous occurrence of two or more chronic diseases in the inpatient visits. Recently, network science has been proposed to model the co-occurrence relationship between pairs of diagnoses/conditions using EHR data (Divo et al. 2015; Hidalgo et al. 2009). Figure 2 shows a hypothetical example of three related conditions—diabetes, hypertension, and obesity using a disease co-occurrence network (DCN). While exploring the simultaneous occurrence of chronic diseases in inpatient visits across sub-populations and time periods, a stratified analysis of EHRs revealed a co-occurrence relationship among 24 percent of all possible pairs of diseases.

Figure 2: An illustrative representation of a 3-node disease co-occurrence network. The pairwise co-occurrence coefficients between diabetes, hypertension and obesity are derived using number of co-occurrences and prevalence of each disease. 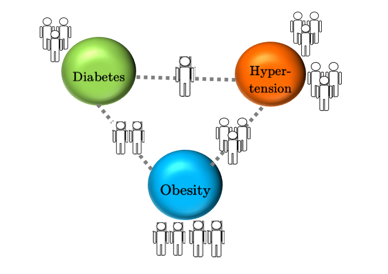 The DCN is a tool that can model the disease co-occurrence phenomenon and is used in several healthcare applications. For problems such as forecasting disease progression, reducing health costs, predicting time to readmission, and predicting rate of mortality, signals from the DCN can be used to account for the disease co-occurrence phenomenon in machine learning problems. For example, Table 2 shows the top three co-occurring diagnoses for the top six co-occurring diseases in Arizona. This list is common across the 11 Arizona regions, but the relative ranking of diseases is different for some regions.

This study explored the spatial-temporal patterns in occurrence of one or more chronic diseases recorded from inpatient visit EHRs of hospitals in Arizona and resulted in several key implications:

In the era of big data, healthcare information system technology and machine learning techniques can be performed on existing data for knowledge discovery and explanatory statistical modeling, as well as for making accurate predictions. Data analytics can be used to reduce costs, improve personal care, and alleviate existing operational problems in chronic disease management.